I was diagnosed with Metastatic Carcinoma of Unknown Primary. Big words that basically meant I had cancer, it had spread, and they didn't know where it started. How do doctors treat something that they don't know much about? Shotgun therapy. That is what we were told they were going to do. At the time, I had heard this phrase before, but I really had no clue what it meant. Apparently, it means shoot it with all they've got, and hope and pray it works. This is EXACTLY what we did.

I began my chemo treatments on a Friday in May. (Quite possibly the first Friday, but I don't remember the exact date.) When I met with Dr. Guidice to go over my prognosis and treatment plan, he told me that we would try this shotgun therapy, every three weeks. And if I didn't take well to it, to let him know and we would stop. Otherwise, every three weeks, with CT scans like every 12 weeks. The chemo, Taxol and Carboplatin, would be administed over 6 hours. 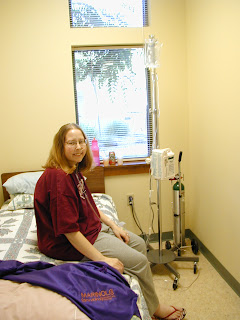 My first chemo session at New Mexico Oncology
Marshall came in for my first chemo treatment. I was scared, but opptomistic that this would save my life. I don't remember a lot from that first day. I got there and was taken to a private room with a bed. An IV was started, and blood was drawn. Like most therapies, my blood counts were important in the dosage. I was given saline to keep the vein open while they ran my labs. I wish I could remember what was said to comfort me, and my family, on this first foray into being a cancer patient, but I really don't. Another standard of my chemo, was a dose of Benadryl, given through the IV, in case I had any sort of allergic reaction. Benadryl, of course, puts me to sleep. So I was excited that I would get to sleep through most of the chemo, since 6 hours is a LONG time. Well, I had hoped I would sleep. Funny thing about receiving IV fluids over 6 hours, it makes you have to pee. Like every half hour it seemed. Luckily, the restroom was right outside the private room I was in, unluckily, I was extremely weak. Marshall had to help me up each time, and the toilet in the bathroom was so low, I could not physically pull myself up, after going to the bathroom. I wish I could say that this was the worst humiliation I suffered while going through treatments, but it was just the tip of the iceberg.

The nursing staff at New Mexico Oncology really were my angels, and for my second chemo, had gotten a toilet riser, which if you have never heard of this, it is an elevated seat, with handles. I was so very excited that I would not need help getting off the toilet. Only problem, I was getting weaker and weaker as the weeks went on. Getting up was no longer the main issue, but just getting to the bathroom in the first place. Again, the wonderful nurses had another idea to make my chemo sessions as hassle-free for me and my mom (and Marshall when he could make it) as possible. They suggested a catheter. Wait, what?!?!? Yeah, that doesn't sound hassle free, AND it sounds painful. It took a little convincing, but the catheter won out in the end. I don't remember exactly how many weeks and chemo treatments I had a catheter inserted, but it was a few or more. There were definite ups to the catheter. I could sleep through the treatment once the Benadryl kicked in, which was generally around 3-4 hours.

I wrote earlier of secondary effects of chemotherapy, but there was some immediate effects I had to deal with. First, chemo plays havoc on your blood cells, so even though I was only scheduled for chemo every three weeks, I had to go into the oncologists office every Friday, to have my blood drawn. Depending on my levels, red blood counts and white blood counts, I had a have a shot, sometimes two. Pretty much every Friday I had to have a Procrit shot. This shot is to help increase the amount of red blood cells, and hurts like hell. The best way to receive this shot is very slowly, as it burns less. The shot for white blood cells, Neupogen was given less often, but was much worse. You see, in order to produce more white cells, you have to get the bone marrow involved, and for those of you who don't remember, bone marrow is INSIDE the bones. Stimulating the inside of the bones is not fun, and very painful. This shot was also given in threes. After three injections, they would check my blood again, and if they white blood cells hadn't increased, I had to keep getting the shot. I learned after the first shot to take ibuprofen BEFORE the shot. On those Fridays, when I wasn't sure if I neeed the Neupo (as it was referred to) or not, I would take 400mg of ibuprofen right after.

Chemo, and weekly blood tests became a steady part of my life, and I guess the biggest thing I can say, at least I was never afraid of needles.
Posted by Lonnie at 4:37 PM