Where Do I Begin?

I have had medical issues my entire life. Nothing serious, really. Allergic to mosquitoes, being extremely clumsy and ending up in emergency rooms, having female issues. Basically, all of these issues meant that I did not go running to the doctor every time something was weird. I learned much later that when something is off, you should go to the doctor. So I did.

I had a flight to Albuquerque, New Mexico, to go home for Easter. I had been having issues for a while here in Georgia, so my mom made me an appointment to see my primary in Belen. I remember waiting at the Frontier ticket counter in Atlanta for a wheel chair. Whatever was going on with me made it difficult to walk any distance. Sitting was pretty bad, too.

The wheelchair came and I made it to Denver. This was a particularly horrible layover. My connecting flight was delayed due to rain; our gate was changed several times and eventually I was parked in front of the gate they HOPED the flight would depart from.

By this time, I was in a lot of pain. I can't really describe it. My bones ached and felt like they were on fire. I had been keeping in contact with my mom, trying to let her know when I would get there. She could obviously tell I was hurting and asked if I wanted to go straight to the hospital. I told her I just wanted to get home and to bed. I would see Laura (my primary) the next day.

They finally brought a plane up from one of the hangers, but we had to wait for it to cool down. I remember FINALLY being on the plane and asking a flight attendant for a glass of water so I could take some Ibuprofen. I was in so much pain! She told me that we were getting ready to taxi and she could not give me any water. I cannot remember how many more times I asked or if I cried to her, but she finally agreed and gave me some water. She also told me that as long as the fasten seatbelt sign was off, I could stand in the bulkhead area. Remember, I said that it hurt to sit.

Well, I finally landed in Albuquerque, HOURS late. My uncle worked for the Albuquerque Fire Department and got special permission to meet me at the plane. (Not the gate, he was waiting on the jetway with a wheelchair!) I don't remember much after that. We went home, and I am sure I went to bed.

Friday morning was my doctor's appointment. Good Friday. I should clarify that my primary, Laura Griffith, is actually a Family Nurse Practitioner. I remember explaining to Laura what all I was going through. (Don't worry, I will explain the months prior to this in another post.)

She heard me cough the "sick person's cough," as my mother calls it, and immediately sent me to have a chest X-Ray. After she looked at them, I was sitting on a gurney, wearing a mask, and waiting for an ambulance to take me back to Albuquerque, and the hospital.

I bypassed the emergency room, and was whisked upstairs, at Presbyterian Hospital, to some sort of reverse oxygen room, used for Tuberculosis patients. Many more tests were ordered and Saturday morning...

The hospitalist walked in to the room. The sun had only started peaking over the Sandia Mountains. She looked at my mom and I and said "I am so sorry, it's cancer."

Now, that news was not as devastating to me, as I am sure it was to my mom. The reason why? I REALLY was sick! It wasn't all in my head. And I knew that a diagnosis meant they were going to fix me. In those first few moments, I never considered I was dying, or already actually close to dead.

That day I had many more tests done. Including CT scans of my torso and head. They wanted to know just how far the cancer had progressed and where and how it started.

Easter Sunday. My mom tells this story best, so I will use her words.

"As the sun came up over the mountains, that Easter morning, the doctor came in and said 'It's not in her brain.'" Which she knew was the best news she could ask for. I needed to be able to tell her and the doctors what I was going through, and with the cancer NOT in my brain, I could.

The cancer was pretty much everywhere else, though. I had multiple tumors on both lungs. Mom said the X-Ray looked like someone had splattered paint. There was also a tumor 2/3 the size of my liver and it had progressed into my bones. The cancer has eaten a hole in my left hip, and eaten away my tailbone. Thus the reason walking and sitting were so painful.

I spent about 10 days in the hospital. During that time, many old faces passed through my room. Some I hadn't seen in years, and a few that I wasn't sure I would see ever again. It is very sad to think of the reason these old friends came to see me, but for whatever reason, I am still so grateful at the outpouring of love and support my family and I received.

There was one very special visitor at that time. The reason I was in Georgia in the first place (but more about all of that later). Marshall, not sure if I would have classified him as my boyfriend, fiance, or just the love of my life, flew in a week after I had been in the hospital. With him, he brought a ring. He told me that if he was going to lose me, it was going to be as his wife, NOT his girlfriend.

Unfortunately, for legal purposes having to do with insurance, we could not legally get married. However in my hospital room, with my best friend Renee and God as our witnesses, we pledged our love to each other "forever and always." 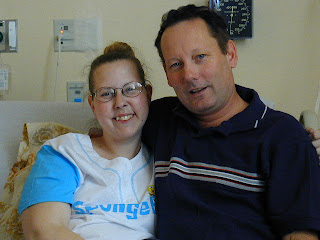 I was discharged from the hospital a few days later. Marshall could only stay for the weekend, as he had to be back at work on Monday. I have to say one of the luckiest breaks I had in the hospital is that Richard Guidice was the doctor on call.

I met with Dr. Guidice a few days after being discharged, to go over prognosis and treatment plan. My mom's friend Steve Jones came with us to take notes and ask the questions we forgot. We also could not be expected to digest and remember everything we were told that day. And to this day, I really don't remember. Except when Steve asked the dreaded "what's the best and worst case scenario?"

Dr. Guidice said at best 2 years, and at worst 8 months.