Living (and Dying) in Georgia

I moved to Athens, GA in late December 2002. A few days before the actual move, I was diagnosed with a Urinary Tract Infection and put on antibiotics. Funny story, getting all my stuff together to move was quite hectic. My dad wasn't exactly happy that I was moving 2000 miles away to live with a man twice my age. (He actually tried suffocating me with a garbage bag on Christmas day! I think he was trying to be funny, but as he was picking up wrapping paper he slipped the bag over my head! But I digress.) So Dad and I were in the front yard trying to put my camper shell back on my S-10. He kept hitting it, and cussing. I was getting worried at how he was going to act once Marshall got to NM. All of a sudden (it seemed) I broke out in hives. Okay, I'm having a panic attack, I thought. Turns out I was allergic to the antibiotics! Hives cleared up as soon as I finished the prescription. I thought that was an interesting story to start with. :)

I wish the UTI had gone away, like the hives. I had been in Georgia for like one week, and I was still having pain, so I went to the GA version of Urgent Care, called Quick Care. More antibiotics. The pain didn't go away. I found an over-the-counter pill called Azo that was supposed to help with the pain, and only side effect, it turns your pee orange. Okay, I can deal with that.

As the weeks went on, the pain got worse, and seemed to spread. Now all of a sudden, my legs were bothering me, and I pulled my groin muscle. If anyone hasn't pulled this ITTY-BITTY-TEENY-TINY muscle, DON'T! It hurts like hell, and takes forever, it seems, to heal. All this time I was taking classes in Atlanta at Georgia State University. It was a 60 or so mile drive into Decatur, GA to the Avondale MARTA station, where I caught the train into downtown, then walked 5-10 minutes, to the Aderhold Building for my first 2 classes. I learned that if I left the house before 7:00AM, (if Good Morning America came on, I was running late!) and caught the 9:18 train, I could be in class before it started at 10:00. If I missed that 9:18 train, well, I was going to be late.

So back to the pain. I started having other issues in early February. Issues of a female kind. The Quick Care put me in touch with a local OBGyn, but I would have to wait until March to get in to see them. Okay, I can wait. I remember that this was February, because Marshall got tickets for us to see Bon Jovi at Philips Arena in downtown Atlanta for Valentine's Day. He also made hotel reservations at the Westin Peachtree Plaza for that night. The plan was for me to meet him at the hotel after I was done with class. I walked the 5 or 6 blocks from GSU, but by the time I got there, I was tired, sore, and in a lot of pain. We walked across the street to the Hard Rock Cafe for dinner, but when it was time to head to the arena, which was only a few minutes walk away, I couldn't do it. I made Marshall get a cab. The concert was wonderful, but I really couldn't enjoy it. Moving hurt WAY to much, so I sat and listened. I could not even muster the strength to stand when they played MY song "It's My Life, " and that KILLED me. 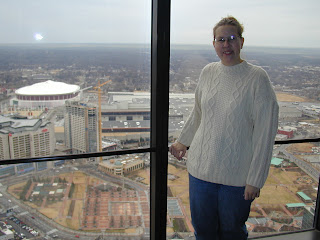 At the Westin Peachtree Plaza
That would be the first of several cab rides to travel a couple blocks in downtown Atlanta. One day in particular, I just could not walk the 4 blocks from Aderhold to the General Classroom Building. I hailed a cab, but I was so weak, I had trouble pulling myself up into the van. In fact my foot slipped at one point, and I received a bad gash/scrape on my shin. (The bruise/mark from that scrape remained on my shin for almost a year!) Another problem I had was getting into the building. The street entrance that I used had half a flight of stairs to get to the door, then you either had to go up or down another half flight of stairs to get to the elevators. Why did I not use another entrance? That was an even further walk.

On several occasions I was in so much pain after walking from Aderhold, I did not think I could even try to go up the stairs. One day I called Marshall after my first two classes and made him drive the 20 miles from Tucker, GA to downtown to come get me. I can't remember if he drove me home, or just back to my car, but I was in that much pain. Another morning, I did not even make it into Atlanta. I had started driving with my leg tucked under me, because of how much it hurt to sit. I was driving towards Atlanta from Athens on 316 (the main road between the two) and started getting very nauseated. I pulled over at a Waffle House and did not even make it out of the car (but had the door open) before I puked. (For months after, the parking lot still had an orange hue, probably from those AZO pills.) Marshall had JUST gotten to work when I called, so he turned around to come get me. The truck stayed at the Waffle House until that weekend when his he and his son could go pick it up.

And then there were the times I did not even make it out of the driveway. One morning I was headed to school, and tripped and pulled that groin muscle again. I had to pretty much crawl back in the house. There was no way I was going to be able to drive to Atlanta.

Through all of this, I had countless visits to Quick Care. I had several pregnancy and STD tests done. At one point I was beginning to wonder if I had Multiple Sclerosis, like my dad. I was diagnosed with UTIs, URIs (upper respiratory infections), yeast infections, etc. but no one seemed to put all my symptoms together. One horrible night Marshall took me to the ER, where the doctor I saw proceeded to give me the worst and most painful pelvic exam I have ever had. Let me just tell you how hard it is to hold your legs in the stirrups with a pulled groin. I tried to explain that the pains I had were not menstrual-type, but when you are a 22 year-old female presenting with abdominal pain, they want to do a pelvic exam (I had probably one a week for a while there!). I ended up back at the ER the next day, but they had me seen at the Quick Care at the hospital, where I refused a pelvic exam. Still nothing.

By this time, it was early April. I had seen the OBGyn, and they decided that those issues I was having, was from an overactive Skeen's Gland (never heard of it? Yeah, me neither.), and they suggested removing it, as it really isn't important. I knew I was going back to NM for Easter, so I scheduled the surgery for the week after I got back. Only, it would be over 7 months before I returned to Georgia.
Posted by Lonnie at 1:34 PM