I wrote an anti-pink blog back in October of 2010, and I am surprised that two years later, come this time of year, other cancer survivors/fighters are still finding MY blog while searching for anti-pink ribbons.


October is my favorite month...BUT...


While Ford's Warriors in Pink commercials have begun airing during my favorite TV shows, I have to say that I am not quite as annoyed as I have been in past years.

Actors such as Billy Gardell and Neil Patrick Harris are seen wearing the Warrior in Pink apparel, and the commercial says that you can pick where your donation goes (according to uneasy pink there are four different organizations from which you can choose). This makes seeing so much pink a little easier.

I think having been in remission now for almost 8 years helps, too. I am proud to have the title of SURVIVOR, but more than anything, I want to be LONNIE. I am a flawed human, like everyone else. I just happened to be extremely blessed to have not been defeated by an ugly word and disease.

For all of my fellow cancer survivors, and those cancer fighters, who can't stand the wash of pink this time of year, just try and remember that there are other wonderful organizations out there like Stand Up to Cancer and the American Cancer Society that aren't only concerned about the ta-tas. 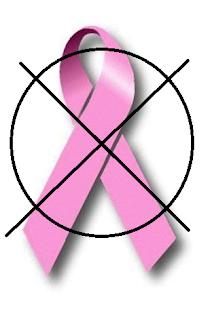